NRF is one of retails big annual pilgrimages with many leading UK and European retailers heading over to NYC for what has become a showcase for technology and industry-led thought leadership.

Featuring 400+ speakers, 200+ workshops and 40,000 attendees, NRF this year hosted more than 800 companies in a space the size of four football fields. And that’s not all – NRF forms part of Retail Week which includes pre and post exhibition events all over New York, so there’s a lot to see and do in a short space of time. NRF’s Big Show can easily be overwhelming, so this report attempts to highlight the key takeaways from the show, from people who were actually there.

Perhaps now’s the time to explain what I mean by ‘people who were actually there’. I’ll confess, I wasn’t, however this week I did get to spend the day at the Microsoft Partner Executive Summit in London, and happened hear a lot of interesting comments originating from the show, particularly during the Retail breakout session in the afternoon where, according to KPMG, 2019 has been the worst year in retail for 25 years, and although many of the figures reported for December 2019 initially appear positive, these were heavily distorted by the timing of Black Friday (or Black week as it appears to have become) and that in reality, overall sales declined. 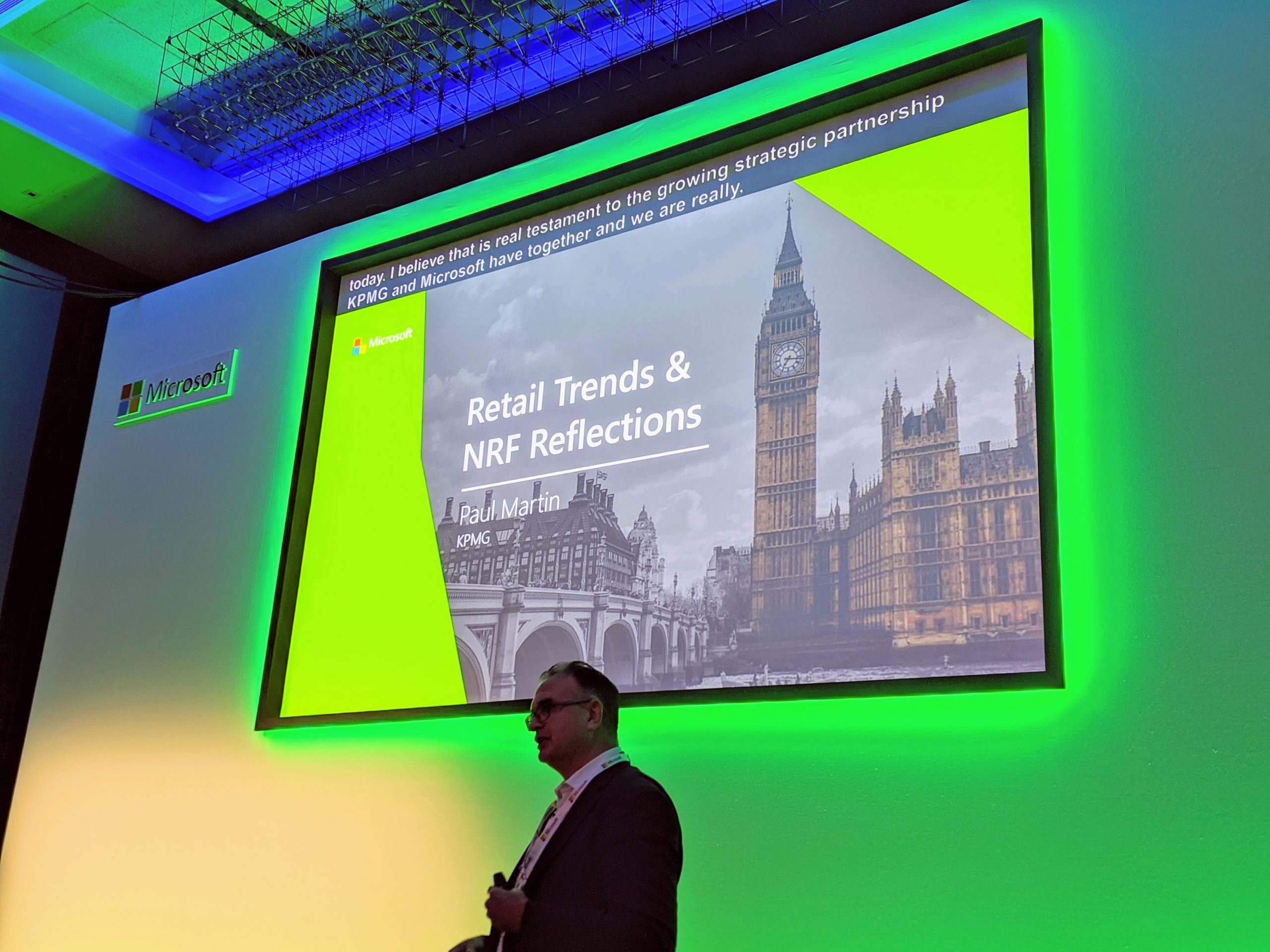 Paul Martin, UK Head of Retail at KPMG took us through the figures, whilst highlighting some Retail Trends and NRF reflections saying…

“At first glance retailers’ relentlessness paid off in December, with total sales up 1.9%. However, the later timing of Black Friday will have skewed the outcome. If looking at November and December combined, sales actually declined by 0.9%.

“Consumers clearly favoured logging on to walking in, with online sales up 12.8% in December. However, if taking a two-month average, growth online was clearly muted at only 2.6.%.

“Grocery is usually a winner during the festive season, although it is important to highlight that growth has been weakening recently and for many players, Christmas did not deliver the results it has in the past.

“All growth will be welcome, although the true performance of Christmas trading is still to be determined. The cost of customer returns must not be overlooked. That’s especially true as online fulfilment already costs retailers a pretty penny. Christmas trading reports will likely be mixed, but those that have truly performed well will have managed margin and costs well over both the Christmas period and beyond.” 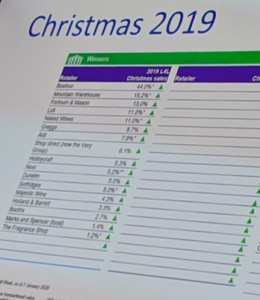 Paul went on to explain that a stagnation of sales has failed to deliver growth and that as consumer expenditure slows, product-centric retail will continue to be flat (at least for the foreseeable future). A key message coming out from both the MS Summit and from NRF has been that retailers need to innovate if they are to stay ahead of the competition, and that cost & efficiency is key.

There were still some winners amongst all the doom and gloom, however, and it was great to see our friends at Hobbycraft, Next, Dunelm and Holland & Barrett performing well.

1. Bricks & Mortar retail continues to offer an abundance of opportunity, but only for those who innovate – a particularly sobering prediction from KPMG was that in a decade’s time from now there will be 20% less physical store space than there is today. Retailer and brand stakeholders need to remain — or become — more innovative than before, improving efficiency and overall service levels for their customers. To keep pace with rapidly changing consumer behaviours and expectations, retailers and brands must optimise their spend to invest more heavily in technology and process automation, which will ultimately help them fulfil these expectations more quickly and skilfully.

2. Omnichannel – According to CEO Erik Nordstrom, categorizing retail into channels should by now be a thing of the past. Customers aren’t thinking about separate channels when they shop – they simply buy in the way that suits them best, and those that cover the whole spectrum of shopping options will win out, be this endless aisle (buy in-store, ship from e-commerce DC or buy in-store, ship from alternate store), buy online, pick up in-store (commonly referred to as click & collect), or buy online, ship from store. Retailers who fail to offer at least half these options will regret not making the investment sooner rather than later.

3. Employee Engagement – Involvement, Ownership, Pride and Excellence are just 4 benefits retailers get by having an engaged workforce. With employee engagement a key talking point at NRF this year it shows just how critical it is to keep teams involved and informed. Using the right blend of information across different formats like videos, voice, text and scoreboards is crucial to winning the hearts and minds of your workforce